English
Since the corona crisis, banks have supported businesses with almost 70 billion euros by offering credits and deferral of repayments, in addition to the support measures by the Dutch government. This shows that bank financing has remained stable, something which can be seen as remarkable during a crisis.

This is displayed in the ninth - and for now last - Corona Monitor, published by the Dutch Banking Association (NVB). The NVB will stop the publication of the Corona Monitor given that that the general support measures by the Dutch government have come to an end (as of 1 October) and the economy is generally recovering well.

“We are proud that  the banking sector as a whole has jointly contributed to resilience of the economy during the difficult circumstances,” says NVB Chair Medy van der Laan. “The government deserves to be complimented on its extensive approach in fighting the crisis. The economic recovery will continue this year and the year to come. At the moment, banks expect a quick return to business as usual and they stand ready to finance the recovery. However, they are mindful of potential financial problems that entrepreneurs could face during the phase out of the support measures.

From the total amount of 66.5 billion financing offered during the crisis, 3.8 billion euros have been provided with a guarantee by the government, such as the SME Credit Guarantee Scheme (BMKB-C), the Corporate Finance Guarantee (GO-C), the Credit Guarantee Scheme for Agriculture (BL-C) and the Small Credits for Corona guarantee scheme (KKC). More than 8600 companies have received a loan with a government guarantee. 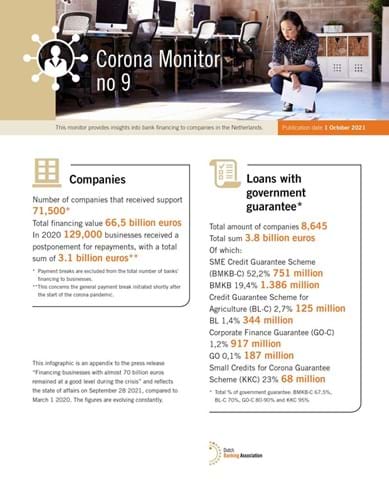